PHX Suns on the Rise: Don’t Call it a Bandwagon 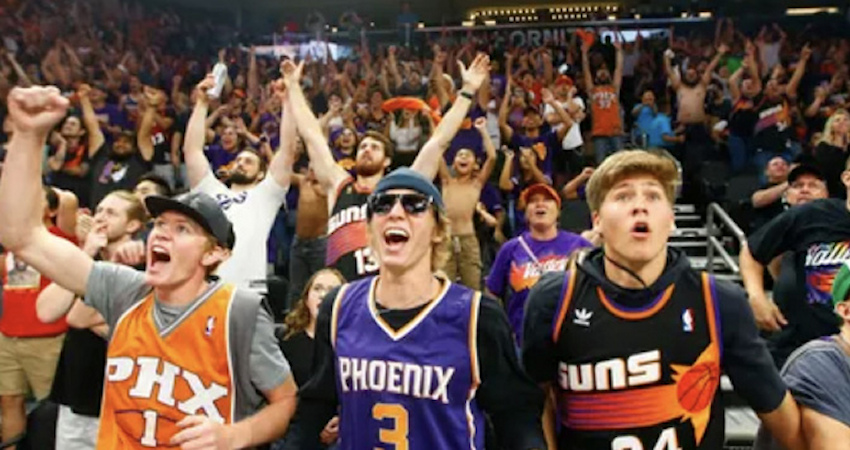 Phoenix is a basketball town and I think we’re finally ready to love again. For the better part of five decades, the Suns were in the winning business, and now once again, business is a-boomin’! But don’t, for one second, think our reinvigorated intensity and passion for purple and orange means we’ve fallen into the fair-weather category of fandom. We simply couldn’t stomach the sorrow.

The Suns now have more than 50 years’ experience under their proverbial belt – most of which was exemplary. The Suns boast the NBA’s 7th-best all-time winning percentage. They have 10 Hall of Famers, two NBA MVPs, three conference titles, seven division titles and keys to the one and only Purple Palace. There’s a lot to be proud of in Suns’ history. The last decade, however, is not.

The last 10 years was an abysmal, earth-shattering, confidence-killing mess of a decade on the court. Four different head coaches couldn’t get the job done. Star players asked – nay – BEGGED for a one-way ticket out of the Valley. The new owner couldn’t seem to get out of his own way and brought so much heat on the club, we started looking for Pacino, De Niro and Kilmer. They lost and lost big and experienced one of the worst playoff droughts in modern history. It was enough losing and heartache to make even the die-hards dormant. And that’s the key. Dormant fans are back, out of hibernation and ready to win.

It’s not fair to say the new-found, raucous fanbase hitched their ride to the bandwagon. After all, 10 years of getting punched in the mouth will wear on anyone. Dormancy is a much better term for those who simply couldn’t allow themselves to drift into despair – dying a little death with every missed bucket and last-place finish. But with the old head Chris Paul, the young gun Devin Booker, the towering tyrant DA and a host of excellent role players, the Suns have the best chance at bringing a title to the Valley since the 2001 D’backs.

We’re ready. And to all the other NBA fans out there who have something to say about the “easy” route our Suns had on the road to their first-ever title, ahem, Momma said knock you out!