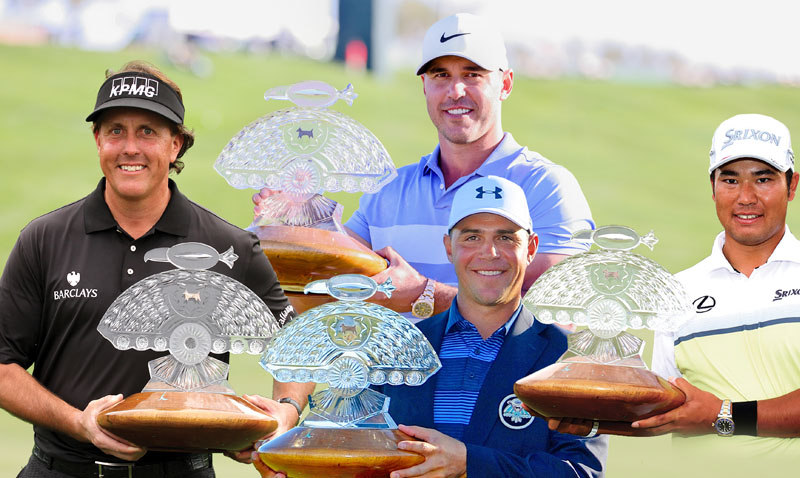 “The People’s Open” aptly fits the Waste Management Phoenix Open, by far the most-attended golf tournament. And despite the fact that many among the vast “galleries” routinely see about the same amount of golf as they would at an actual art show, the tournament continues to be a “major” draw for fans and TOUR players alike.

“I used your positive energy,” he said to Amy on facetime shortly after the championship.

Hideki Matsuyama won the 2021 Masters, becoming the first Japanese man to earn a major. In 2017 he nearly tied a WM Phoenix Open record, set the King himself, for three-consecutive championships.

Also this year, Phil Mickelson earned a sixth major. His roots run deep at the WM Phoenix Open; the perennial crowd favorite has been riling up the ASU fan delegation since 1992, and on three occasions (2013, 2005 and 1996) rewarded them with wins.

A Rich History of Winners at the WM Phoenix Open

Traveling back to the beginning of competition at TPC Scottsdale, Sandy Lyle won the WM Phoenix Open in 1988, picked up a green jacket three months later and added it to his collection, which already included the Claret Jub gained in 1985 at St. George’s. Finally, Paul Azinger captured the first WM Phoenix Open contested at TPC Scottsdale, 1987, before his 1993 PGA Championship win at Inverness.

There’s no Super Bowl in golf; instead, the majors have served as the ultimate measure of greatness. Some consider the Players Championship as the fifth, and with the rise of the FedExCup (Mickelson 2009, Singh 2008), there’s definitely more than just four ways to make a big impact in men’s professional golf. Given the game’s firm ties to tradition, the complexion of the zenith of golf is not likely to change much. Until then, the Waste Management Phoenix Open is proud to be known as “The People’s Open.”