NCAA Golf Championship: Year One Under the Belt 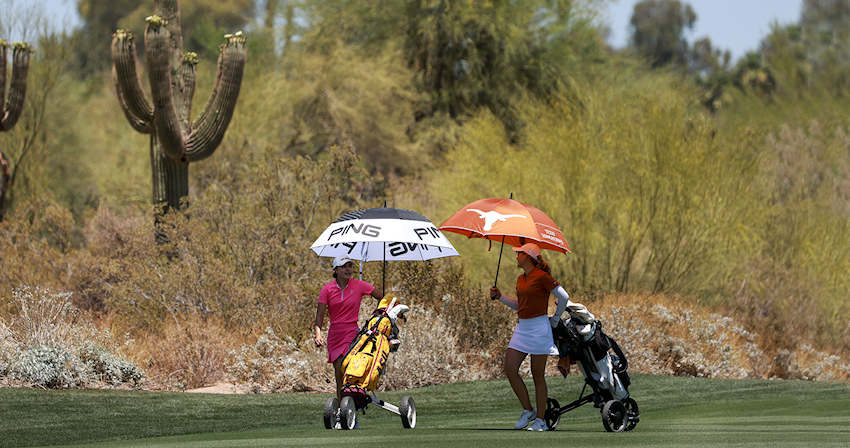 After a gut-wrenching delay when everyone involved probably felt like their belts were cinched a bit too tight, the 2021 NCAA Men’s and Women’s Golf Championships went off without a hitch at Grayhawk Golf Club, May 21 – June 2.

The collective sigh of relief certainly started with the players, families and coaches. The anticipation must have been unbearable. Likewise, those setting the stage for the athletes finally saw their hard work bear fruit.

Freshman Sun Devil Ashley Menne made a statement with a historic third round 65 (-7) to match the Sun Devil NCAA Championship record set by Grace Park.

“Ashley has so much potential and she showed a glimpse of what she is capable of today,” said Head Coach Missy Farr-Kaye.

Menne finished in fourth place, the highest ASU result since Monica Vaughn in 2017. This year, however, Stanford’s Rachel Heck claimed it at 8-under par. Neither outcome was surprising. Local Xavier grad and longtime Junior Golf Association of Arizona member, Menne has been racking up wins at a devilish pace for years, and Heck redeemed two previous second place finishes (four appearances overall) at Grayhawk during the Thunderbird Invitational Junior. With the NCAA championship already safely in the bag, she recalled final-hole drama during one of her earlier near misses.

“Well, funny story,” Heck said. “I played in the Thunderbird. It’s a junior golf tournament on this course. I was tied for the lead, and I was about 200 out. I went for it, hit it in the water and I lost by one.”

In the women’s team competition, Ole Miss didn’t miss. With their backs against the wall, the Rebels dispatched Texas, edged out Arizona, grabbed early control of the championship match against Oklahoma State and closed it out 4-1.

On the men’s side, the Pepperdine Waves swelled to the top of college golf for the second time in team history after a victory over Oklahoma. Although Oklahoma put up the first points, the second match broke for the Waves, and it was all Pepperdine from there.

Not without their accomplishments: Amazingly, Oklahoma’s Logan McAllister made a hole in one on No. 8 in the final match, his second of the tournament! He also aced No. 5 two days earlier.

Clemson’s Turk Pettit captured the 2021 NCAA Division Men’s Golf individual national championship after shooting even-par 70 in the final round. Beginning on No. 10, Pettit made birdies on 12 and 17, moved to -9 and took the lead by the time he made the turn at 2-under par for the day.
The Sun Devils, who gave way to Oklahoma 3&2 in a tight semifinal match, certainly have a lot to be proud of.

“I’m so disappointed but at the same time this is competition,” Sun Devil Men’s Golf Head Coach Matt Thurmond said. “They just made one more putt, one more good shot than we did. In a couple days I think we’ll feel a lot better. We had a great season.”

The buzz surrounding the second day, for example, centered on ASU’s Ryggs Johnston, as the Sun Devil sophomore turned in the best round of the tournament, -7, to jump 53 spots up the leaderboard. He ripped off nine birdies in the round – six on the front nine alone. ASU also stormed back in the final round of stroke play to claim the top seed heading into team match play competition, shooting 5-under par and erasing a 14-stroke deficit to catch the Oklahoma State.
Despite enough bad news in 2020 to please Oscar the Grouch, the 2021 NCAA Men’s and Women’s Division I Golf Championship exceeded expectations. “Dark clouds” don’t stand a chance in the Valley of Sun. The weather was perfect, competition was tight, smiles lit up faces and laughter filled the air.

Congratulation to everyone involved! You all deserve to loosen up your belts and relax, but remember to mark your calendars for the next spin along the #RoadtoGrayhawk, set for May 20 – June 1, 2022.