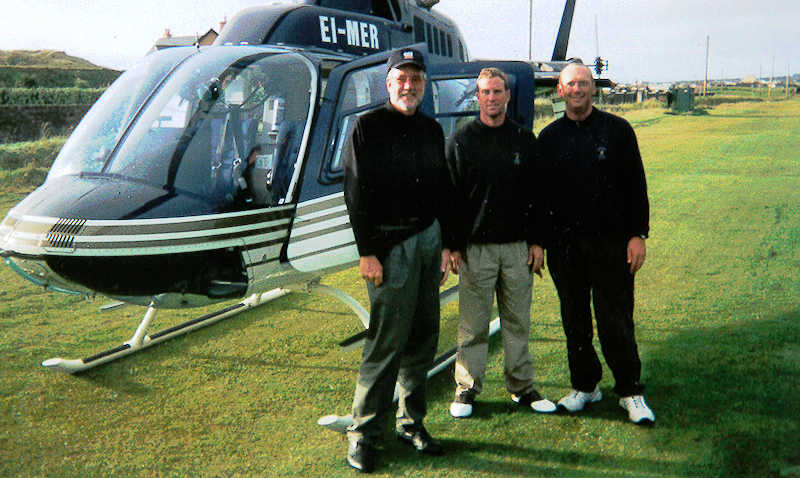 When it comes to the Irish, the truth of their hospitality is even greater than its reputation. I was fortunate to have been one of eight who visited the Emerald Isle for a golf trip in September 2000. And, while there are many great stories associated with the 10 days (and countless pubs) we enjoyed Ireland, one stands head and shoulders above the rest.

It took place about the midpoint of our trip. Following our afternoon round, we needed to trek from Ballybunion to Dublin to reach our hotel for the evening. We were told it would take roughly six hours by car, traveling on roads as rumpled as an old bedsheet and just wide enough to fit a car and a half. A couple of my colleagues bristled at the thought and demanded we rent helicopters for the journey.

At Ballybunion, our van driver wished us well as he went on ahead taking our belongings to Dublin. If our plan worked, we would arrive in Dublin via helicopter about the same time he would. Of course, it didn’t.

After our rain-soaked round, we found the two helos waiting for us; however, we were greeted with the news that we couldn’t fly in the rain. What? Everything we owned was almost to Dublin, and we were stuck wearing drenched golf clothes in the bar at Ballybunion. We debated our next move for about two hours. It was just enough time for our chubby Italian attorney friend to drink an entire pint of Middleton’s whiskey (That’s another story).

Out of nowhere, our pilot announced we had a short window of decent weather, and maybe…just maybe…we could make it. Overjoyed (mostly), we darted to board the two choppers, four passengers to each. Once airborne, our pilot informed us of a little catch in the plan (there’s always a catch). Because of the poor visibility we would be flying no more than 100 feet off the ground – for the next hour and a half! Predictably, the weather worsened halfway into our flight.

With the storm building, the pilot decided we couldn’t go on. He said, “There’s clear air five minutes ahead, but we can’t make it. We’re setting down here.” Before we could all panic, he circled and landed in a field. Slightly stunned, we looked around. None of us had any idea where we were. I don’t think the pilot did either. Well, I’m sure he had a better idea than we did, but this field definitely wasn’t part of the flight plan. The next I knew, a nice man came running up to the helicopter with an umbrella. “Are you gents alright?” We all nodded. “Then, please come in.”

So, a little after 8 pm, four wet, exhausted and slightly drunk Americans sat down at the kitchen table of Dennis and Marie Baker of Portumna, Ireland. Before the pleasantries even ended, Marie and her mum started pouring drinks and making cookies. A few minutes later, they sent their son to the market to fetch more ingredients for Irish coffee. We had depleted their stock.

For three hours, we ate, drank, shared stories and laughed at my attorney friend flirting with the grandma. Sometime around 11 pm, Dennis realized we still needed to get to Dublin and called a friend who owned a bed and breakfast. This friend found us a van to make the three-hour drive.

Two weeks after we returned home, I received a note in the mail from Marie thanking us for “dropping in.” She included a clip from the local newspaper, the Portumna Times, about the four Americans who made an unexpected visit to the Bakers. 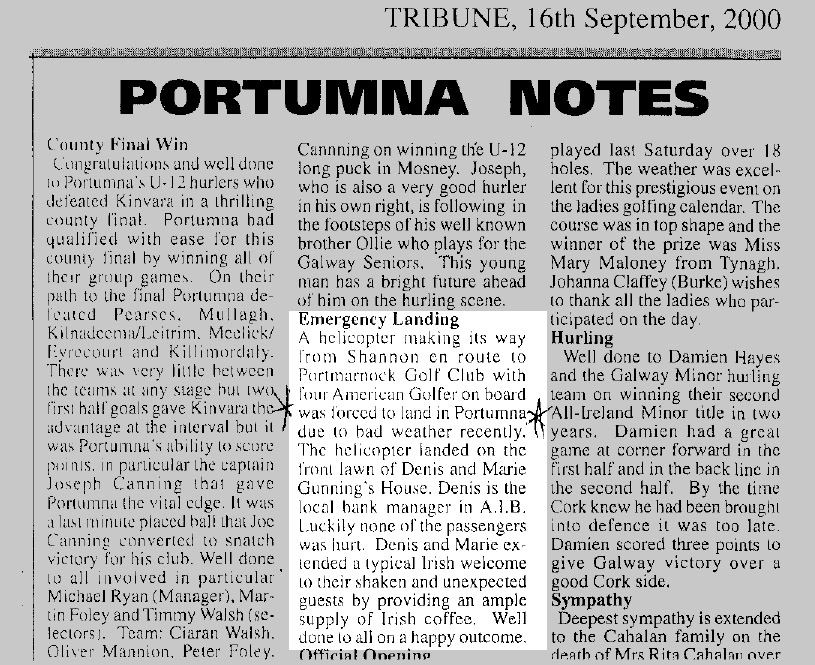 During the flight, we got separated from the other four members of our group due to the poor weather. Turns out, they landed and spent the night in a castle. Yes, a real castle. Sounds cool, and they have stories of their own, but nothing to match the warm welcome hearty laughs and Irish hospitality we received from the Baker family some 20 plus years ago.